This Saturday I’ll be at CrossFit Cordis in Oakville competing in the Tag-Team Open. Saturday is the same-sex team (team = pairs) competition, and some others from CFW are doing the mixed gender team comp on Sunday. Competing in a team event will be interesting! I’m already nervous… I’m hoping the more competitions I do, the nerves will start to subside and I’ll just be excited. If you’re in the area, feel free to drop in and say hi J

What I learned from the Open

That pretty much sums it up.

Now, I didn't love every second of the Open. The first workout (see descriptions of all the workouts here) was brutal for me. As I've mentioned about a million times, my conditioning is my biggest weakness. The weights were comparatively light for women, so the workout ended up being mostly conditioning, aka 17 minutes of hell. During the workout I was suffering. I wanted to give up and I was telling myself over and over...

There are too many reps left. You can't breathe. You're never going to finish. You won't even finish these burpees, let alone get back to the bar for another round of snatches. You've failed. You hurt too much. This is too hard.

I didn't reach the goal I set out for myself. I felt ashamed and let down. Most of all, I was disgusted with what happened to me mentally during that workout. OF COURSE I failed. I barely gave myself any other choice.

After that workout, I took a very different approach to each Open WOD. I concentrated on staying calm and focused on my breathing. I stopped worrying about what other people were doing beside me and focused on my own goals. It can be tempting to look at the person beside you and become intimidated at how fast they're going and try to speed up to match them. But they have different strengths and different goals.

After I figured that out, the rest of the Open was a lot more enjoyable. Still pretty damn hard, but in a good way. I set smaller goals for myself and let myself feel happy about achieving them rather than beating myself up about the things that I didn't achieve. If there was something I didn't think I did well or if there was a goal I fell short of, I wrote it down, and that will form the basis of my training for next year.

There's something about constantly varied, functional movement performed at high intensity in a community that brings out amazing things in people. Every week we cheered each other on, sympathized with each other's struggles, and shared in each other's accomplishments.

My first CrossFit Games Open experience: Awesome, horrible, fun, exhausting, stressful, and most of all, inspiring. Now I've got a benchmark and a score to beat. I can't wait to do it again next year.

It was such a whirlwind that as soon as the Open was over I got knocked down by a nasty cold. I wasn't planning on taking any time off, but my body had other ideas. But I'm on the mend! Training for next year's Open starts now!
Posted by Tetz at 8:12 PM No comments:

A really great post on why you should lift heavy things

This article is great. It synthesizes the how and what of strength training with the myriad of benefits you can get from lifting heavy things, beyond a hard body.

Posted by hoodie at 4:17 PM No comments:

Last night I made a stirfry using The Best Stir-Fry Sauce Ever by Melissa "Melicious" Joulwan. It was delicious. Seriously.

I used orange and yellow peppers, broccoli  for the veg and chicken as the protein. Served it all up on a bed of spaghetti squash, which was a bit unconventional but I needed to use it up.

I failed to take any pictures because both hands were busy shoveling the food into my face.

Go home and make this tonight. You won't regret it.

Email ThisBlogThis!Share to TwitterShare to FacebookShare to Pinterest
Labels: paleo

9 months ago I wrote about how scared I was to go to my first real CrossFit class. Today I'm writing about a new milestone--my first CrossFit competition.

There was a lot of anxiety in the weeks leading up to the competition. I've written about how I struggle with cardio and bodyweight exercises like pull-ups, and, while those things have improved, they still aren't good. I was afraid of failing.

When I wanted to bail, I thought back to my first gymnastics competition. I didn't have a bar routine, I didn't have a beam routine, I didn't know how to vault. I had a floor routine, thankfully (making that up on the spot is a little more difficult). I really had no idea what I was doing, and I was afraid. At one point, before the competition started, I walked off the floor and sat with my mom in crowd and told her I wasn't going to compete.


I can't remember who convinced me to change my mind, but in the end I decided to go for it. My coach made up routines for me during warm up.

So I did it. I wasn't the fittest, the strongest, the fastest, the thinnest, or the most experienced. But I finished every single workout and I gave it everything I had. I learned so much and it was actually FUN. (and exhausting. Five WODs in one day can tire you out).

So, results. I was placed in the C division after what my coach kindly called a "slight rookie miscue" in the first event (read: I was nervous and I f*cked up. I went too fast, and ended up failing on a weight that I probably could have done if I'd taken my time). Because of my higher body weight and relatively low score in that event (a 1 rep max thruster), and my low score in the second event (a Tabata workout that involved all bodyweight exercises - pull-ups, push-ups, sit-ups, and air squats), I was placed in the lowest division, where I placed third. It ended up being okay - there was a lot less pressure - but the weights were scaled down a lot, and in most cases I could have done the A division weights. The one exception being a bodyweight front squat, because in order to squat it you have to get it up to the rack position from the floor, and I can't quite clean 177 lbs. (Yet.)

I didn't get to take advantage of the things I'm better at (strength movements with heavier weights), but it really drove home that I need to work on my weaknesses - bodyweight movements and... ugh... conditioning.

I left feeling excited, energized, and motivated to attack those weaknesses. Watching the other competitors - including my coaches, training partner, and other athletes from CFW - was inspiring. You can see some great pictures on Facebook and you can read about their awesome results on CFW's blog.

On to the next challenge. I've registered for the Open, the first stage of the CrossFit Games. My expectations aren't high - I know I've still got lots to work on - but I'm excited to train hard for the next 3.5 weeks and then see how I stack up against the rest of the world.


I made it to 5 CrossFit classes and one 2.5 hour game of volleyball this week, so I felt today should be a day of rest. I wanted to do some cooking for the week, but I was feeling lazy and uninspired, so I dragged out all my cookbooks and started browsing through pinterest to find something that would make me hungry.

I happened upon these lettuce wraps from Iowa Girl Eats. I stuck to her recipe pretty closely, with a few minor modifications to make them a bit more paleo-friendly, and they were DELICIOUS. 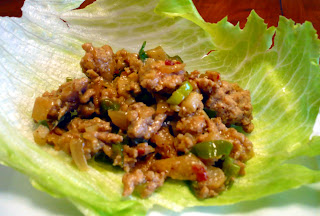 Here's what I did:

Since it's starting to feel like fall, I also felt like it was necessary to make soup. (I don't really like eating soup, but I love cooking it.) It was fun to make but really bland, so I won't waste time writing it out here.

"Annie" is one of CrossFit's benchmark workouts.

I did this workout for the first time on May 24th. In the 10 minute time limit, I didn't get through the round of 40 sit-ups. I was huffing and puffing and remember thinking that I didn't even WANT to get through the 40 sit-ups because I didn't want to have to do more double-unders.

Today, we did it again. I didn't finish the whole workout, but had finished the 20 sit-ups when the buzzer went. I was breathing hard, but I wasn't huffing and puffing. I could have done many more double-unders. I cursed myself for not running faster from the double-unders (outside) to the ab mats (inside) because I know I could have finished that last round if I'd pushed just a little harder.

Sometimes it's hard to see progress from day to day. My workout today didn't seem any easier than the workout I did on Saturday morning. But, I'm glad I got over my fear of filling out my journal, because I never would have been able to see what I've accomplished. In one of my early journal entries I wrote that a 65 lb power clean "might have been too heavy." Today, I know I could have done the prescribed weight for that workout, which was 95lbs.

There are so many things that are still really difficult - running, pull-ups, muscle-ups, ring dips, running, burpees, handstand push-ups, box jumps, running. But today I'm just going to revel in the small victory of 50 more double-unders and 50 more sit-ups than I could do 3.5 months ago.
Posted by Tetz at 9:29 PM No comments: 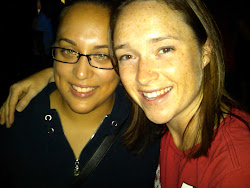